Harris: Justice Dept. ‘Would Have No Choice’ But To Prosecute Trump After Presidency – NPR 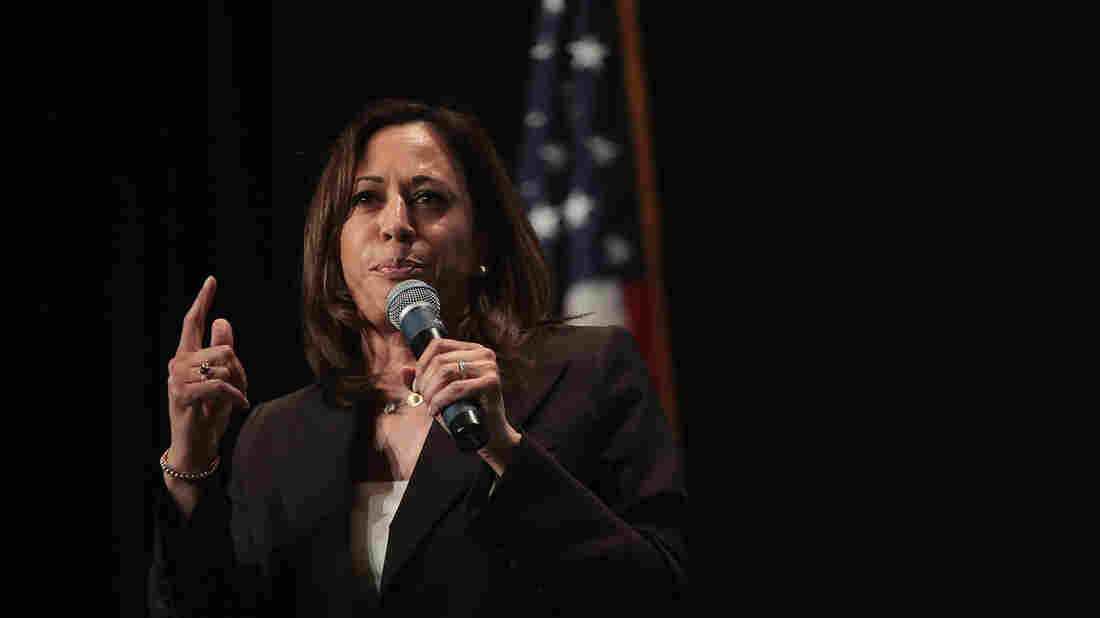 Democratic presidential candidate and Sen. Kamala Harris, D-Calif., spoke to the NPR Politics Podcast on Sunday in Cedar Rapids, Iowa. If she were to defeat President Trump next year, Harris said her administration’s Justice Department would likely prosecute him for obstruction of justice. She also addressed abortion access, the economy and trade.

Democratic presidential candidate and Sen. Kamala Harris, D-Calif., spoke to the NPR Politics Podcast on Sunday in Cedar Rapids, Iowa. If she were to defeat President Trump next year, Harris said her administration’s Justice Department would likely prosecute him for obstruction of justice. She also addressed abortion access, the economy and trade.

“I believe that they would have no choice and that they should, yes,” Harris told the NPR Politics Podcast, pointing to the 10 instances of possible obstruction that former special counsel Robert Mueller’s report detailed without making a determination as to whether or not the episodes amounted to criminal conduct.

“There has to be accountability,” Harris added. “I mean look, people might, you know, question why I became a prosecutor. Well, I’ll tell you one of the reasons — I believe there should be accountability. Everyone should be held accountable, and the president is not above the law.”

The former San Francisco district attorney and California attorney general said she wasn’t dissuaded by the prospect of a former American president facing trial and a potential prison sentence. “The facts and the evidence will take the process where it leads,” she said.

“I do believe that we should believe Bob Mueller when he tells us essentially that the only reason an indictment was not returned is because of a memo in the Department of Justice that suggests you cannot indict a sitting president. But I’ve seen prosecution of cases on much less evidence.”

Referencing the Supreme Court Building’s façade, Harris said, “On one side etched in the marble are the words ‘equal justice under law.’ It doesn’t say ‘except for the president.’ There you go.”

Potential criminal charges against Trump were just one of several topics addressed during the half-hour interview.

At a time when many of the other Democrats in the presidential race are starting to make more explicit arguments against former Vice President Joe Biden’s positions, Harris declined to criticize Biden for his abrupt shift against his prior support for the Hyde Amendment, which prohibits most federal funding for abortions.

“Listen, I’ll speak for myself,” Harris said. “The bottom line on the Hyde Amendment is that it is directly, in effect, targeting poor women and women who don’t have money.”

The NPR Politics Podcast episode is the fourth in an ongoing series of interviews with presidential candidates. The Harris interview took place in Cedar Rapids, Iowa, in the midst of the Iowa Democratic Party’s Hall of Fame Celebration, an event that drew 19 White House hopefuls on Sunday.

Harris had just finished her five-minute speech to the room of Democratic officials, volunteers and activists. It ended with a call for Democrats to “prosecute the case,” politically, against the Trump presidency. Harris cited Trump’s attempts to repeal the Affordable Care Act, and his repeated dismissal of the U.S. intelligence community’s concerns about Russian interference in the 2016 election, among other things.

Trump insists that the strong economy will top all those issues in next year’s election. In the interview, Harris dismissed that view.

“There are pretty much two indicators for this president of the supposed greatness of his economy. The stock market,” said Harris. “Well, that’s fine if you own stocks. Or the jobless numbers, the unemployment numbers. Well, yeah, people are working in our country. You know what? They’re working two and three jobs, and in our America people should not have to work more than one job to be able to put food on the table and have a roof over their head. And so when we talk about the lives of real people in our country, they’re not doing better under this president and his policies.”