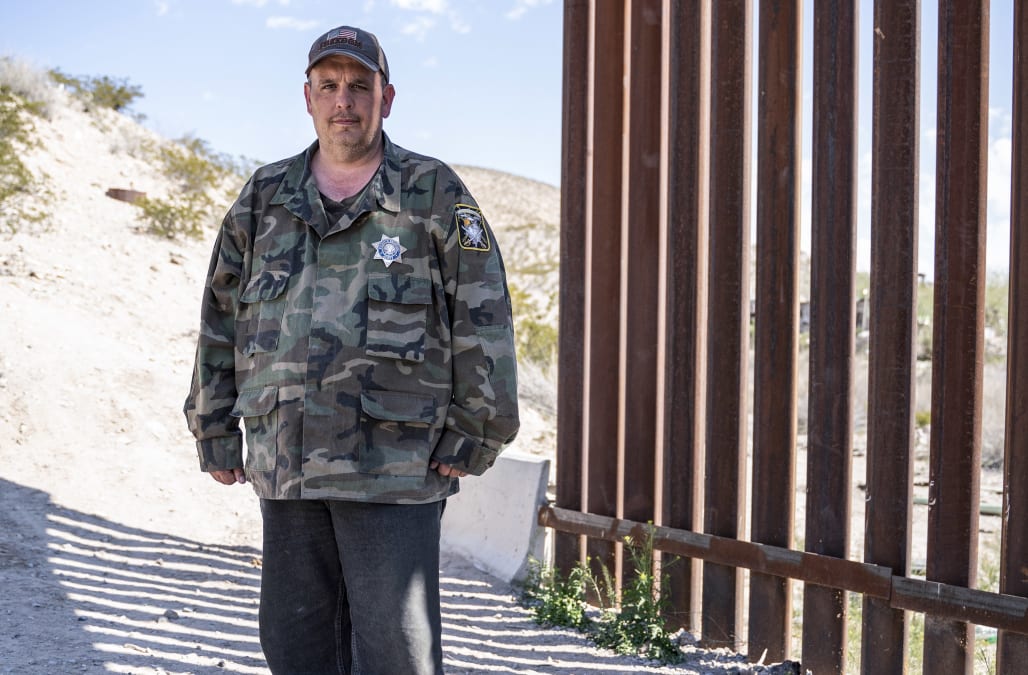 Members of the United Constitutional Patriots, a conservative group in New Mexico, unofficially patrol the U.S.-Mexico border in their home state and detain immigrants crossing the border.

This week, the group detained nearly 300 people, including families with young children, near Sunland Park, as recorded in a video posted to Facebook by member Jim Benvie. “Oh, and look what we got here, guys,” Benvie, 43, said during the live video while stopping a family. “Border control,” he told the group, despite the fact he is not employed by U.S. government.

In the video, Benvie is joined by his camouflage-clad partner who calls border security agents to retrieve the immigrants. “…You never know what’s coming through that wall,” said Benvie. “You gotta have the kids. That’s the passport.”

In more videos, Benvie calls for people to stand behind President Trump, describing immigration as “a very organized invasion.” According to BuzzFeed, a Border Patrol agent temporarily left five women and their children in the care of the United Constitutional Patriots.

Videos of hot and thirsty families cowering in the sand caused the ACLU of New Mexico to demand state officials intervene. On Thursday, the organization sent a letter to Governor Michelle Lujan Grisham and Attorney General Hector Balderas.

“The Trump administration’s vile racism has emboldened white nationalists and fascists to flagrantly violate the law,” read the ACLU letter. “This has no place in our state: we cannot allow racist and armed vigilantes to kidnap and detain people seeking asylum.”

Peter Simonson, executive director for the ACLU of New Mexico, tells Yahoo Lifestyle the group’s actions are illegal. “They say they’re making citizen’s arrests however those can only be executed in the context of a felony — crossing the border is a misdemeanor, at least as a first-time offense.”

The United Constitutional Patriots, however, may be committing state and federal crimes such as kidnapping, false imprisonment and impersonating law enforcement officers, says Simonson. “They wear camo and self-made badges, but they are not deputized by U.S. Border Control.”

A representative of the U.S. Customs and Border Protection tells Yahoo Lifestyle that it “does not endorse private groups or organizations taking enforcement matters into their own hands.”

“Interference by civilians in law enforcement matters could have public safety and legal consequences for all parties involved. Border Security operations are complex and require highly trained professionals with adequate resources to protect the country. Border Patrol welcomes assistance from the community and encourages anyone who witnesses or suspects illegal activity to call 911, or the U.S. Border Patrol tip line 1-877-872-7435,” the representative says.

But the government is ignoring or condoning illegal activity, says the ACLU. “To our knowledge, border control agents have made at least two trips to pick up immigrants the vigilante group has held at gunpoint,” Simonson says. “Law enforcement has an obligation to hold this group accountable. It’s an explosive situation.”

​In a statement to Yahoo Lifestyle, New Mexico Governor Michelle Lujan Grisham states “that migrant families might be menaced or threatened in any way, shape or form when they arrive at our border — often times after an unimaginably arduous journey — is completely unacceptable. It should go without saying that regular citizens have no authority to arrest or detain anyone. My office and our state police are coordinating with the Attorney General’s Office and local police to determine what has gone on and what can be done.”

Attorney General Hector Balderas sent a statement to Yahoo Lifestyle on the situation as well.

“My office has been informed that this week, an armed group has detained nearly 300 people near Sunland Park, New Mexico,” he says. “These individuals should not attempt to exercise authority reserved for law enforcement.”

Benvie and a rep from the United Constitutional Patriots did not respond to interview requests from Yahoo Lifestyle. Benvie told the New York Times that he simply issues “a verbal citizen’s arrest.”

“If these people follow our verbal commands, we hold them until Border Patrol comes,” Benvie told the New York Times. “Border Patrol has never asked us to stand down.”