Cruz’s visit came just days after he formally announced his candidacy, the first major Republican to do so. He addressed a rally in Merrimack and a conference of young conservatives in Nashua on Friday and about 200 Republican activists at the Portsmouth Country Club on Saturday.

In his remarks, Cruz, 44, tried to make the case that he is the conservative Tea Party option, compared with
candidates such as former Florida governor Jeb Bush, who is expected to have the support of the party’s establishment.

“If you see a candidate embraced by Washington, run and hide,” said Cruz, a Princeton and Harvard Law graduate who comports himself as a political outsider.

Cruz catapulted to the national political scene just three years ago, when he defeated the sitting Texas lieutenant governor in a Republican primary. He did so by embracing the state’s Tea Party base, something he hopes to replicate in next year’s presidential primary season.


“In every Republican primary every candidate says he or she is the most conservative,” Cruz said. “I just think the question that every primary voter should ask themself is: Show me how you follow through.”

That is exactly what the Republican Party base wants to hear in New Hampshire, says Karen Testerman, a well-known conservative who ran unsuccessfully for governor and the US Senate.

“What I am hearing is that people are sick of all the talk, and they want someone who acts,” said Testerman. “And with his stance to shut down the government over Obamacare, they are interested in Cruz as a man of action.” 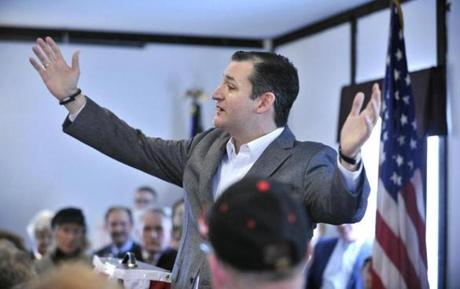 Josh Reynolds for The Boston Globe

“If you see a candidate embraced by Washington, run and hide,” the Texas senator said while stumping in N.H. on Saturday.

Testerman, to be sure, does not speak for all the state’s Republicans. Recent polling has shown that Republican voters here are deeply divided on key social issues. A Suffolk University poll of likely New Hampshire primary voters released last week showed that while Republicans are united on fiscal issues and foreign policy concerns, they are more supportive of abortion rights and gay marriage — which the Legislature here approved in 2009 — than Republicans across the country.

The same New Hampshire survey showed Cruz with just 5 percent support among Republicans, behind Bush, Wisconsin Governor Scott Walker, and even New York businessman Donald Trump, though that was within the margin of error.

Cruz, who announced his candidacy at Liberty University, founded by the late Reverend Jerry Falwell, may ultimately consider all of this reason to focus more on other early nominating contests like Iowa and South Carolina, where social conservatives make up more of the Republican primary electorate.

However, to look simply at where Cruz stands among the full field of candidates right now misses the point of what Cruz is trying to do, according to New England College professor Wayne Lesperance.

“Some will argue that Senator Cruz is not a good ideological fit with New Hampshire Republicans. But this misses the nuance of the membership in the party,” Lesperance said. “Where Cruz does fit in well is with those ideological conservatives who are pro-life, anti-gay marriage, and more likely to support an evangelical and socially conservative candidate. And in this way, Cruz’s primary battle is with Rick Santorum, Rand Paul, Mike Huckabee, and Scott Walker.”

Among this subset Cruz is getting a bit of a head start, according to conservative activists here like Jeff Chidester, a Tea Party-minded local radio show host who attended a Cruz event this weekend.

“Cruz is clearly benefitting from being the first one out,” said Chidester. “He is getting a lot of attention among the conservative base right now.”

How long that continues is another matter, says Wayne MacDonald, former chairman of the New Hampshire Republican Party.

“My sense is that Cruz is sort of the flavor of the week,” MacDonald said. “Rand Paul will announce soon and have his moment, and it will be a few months before this all gets sorted out and we understand the real dynamic of the race, particularly among the conservative base.”

• Scot Lehigh: The artifice and artificiality of Ted Cruz