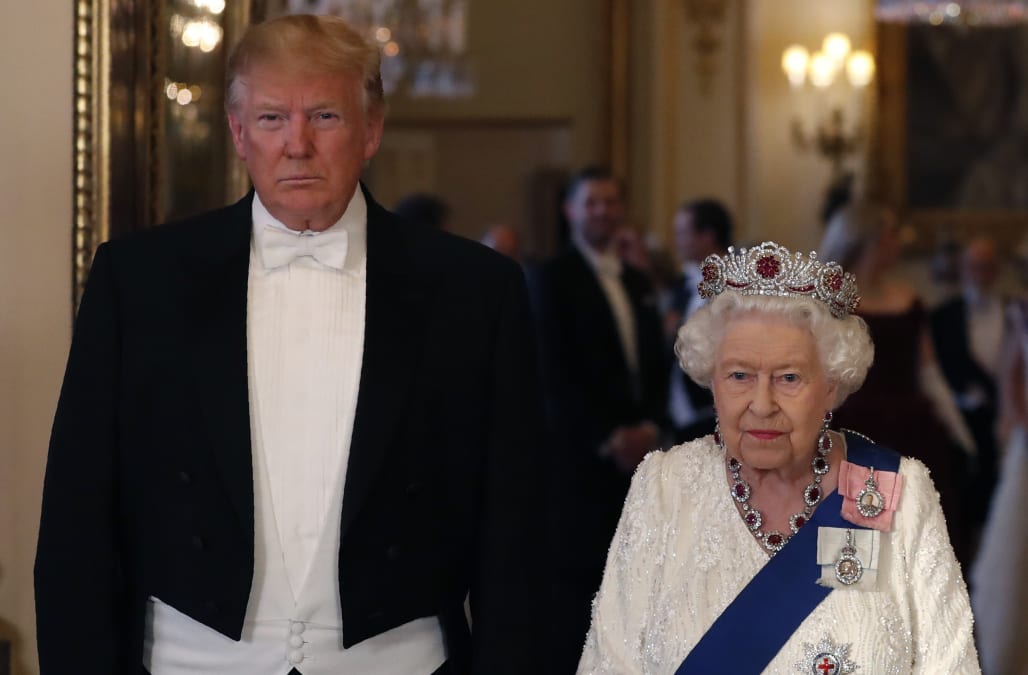 With the exception of a seemingly sulking Prince Harry — whose wife, Meghan Markle, was insulted by Donald Trump in a recorded interview — and complaints that Ivanka Trump didn’t do her patriotic duty, the president’s visit to Buckingham Palace on Monday more or less went off without a hitch.

But according to media present, Trump made a royal faux pas during the state banquet, when he appeared to “lightly touch” Queen Elizabeth II’s back as she stood to give a toast, despite royal protocol dictating that the monarch should not be touched unless she initiates contact.

The Washington Examiner reports that video footage shows Trump also touching the queen’s elbow as he finished his own speech and thanked her.

The queen, however, didn’t seem visibly annoyed by the gaffe. And Trump is certainly not the first to break protocol. In 2009, Michelle Obama wrapped her arm around the monarch, who responded by embracing the then-first lady back.

In her 2018 memoir, Becoming, Obama wrote about the incident and the resulting criticism that she was “uncouth.”

“Forget that she sometimes wore a diamond crown and that I’d flown to London on a presidential jet; we were two tired ladies oppressed by our shoes,” Obama recalled of her time with Elizabeth during the G20. “I then did what’s instinctive to me anytime I feel connected to a new person, which is to express my feelings outwardly. I laid a hand affectionately across her shoulder.”

She continued, “I tried not to let the criticism rattle me. If I hadn’t done the proper thing at Buckingham Palace, I had at least done the human thing … I daresay the queen was okay with it, too, because when I touched her, she only pulled closer, resting a gloved hand lightly on the small of my back.”

Of course, that pales in comparison to President Jimmy Carter’s 1977 faux pas, where he notoriously kissed the Queen Mother on the lips.

There’s also some debate as to whether Trump also broke protocol by clinking his glass against the queen’s after her toast. While etiquette experts cited this as inappropriate, the official Twitter account for the royal family shared a photo of the moment, suggesting that no harm was done.

Twitter, meanwhile, is having a field day. While critics say Trump “disrespected” the royal, his supporters hailed him for “not bowing down before all the other world leaders.”