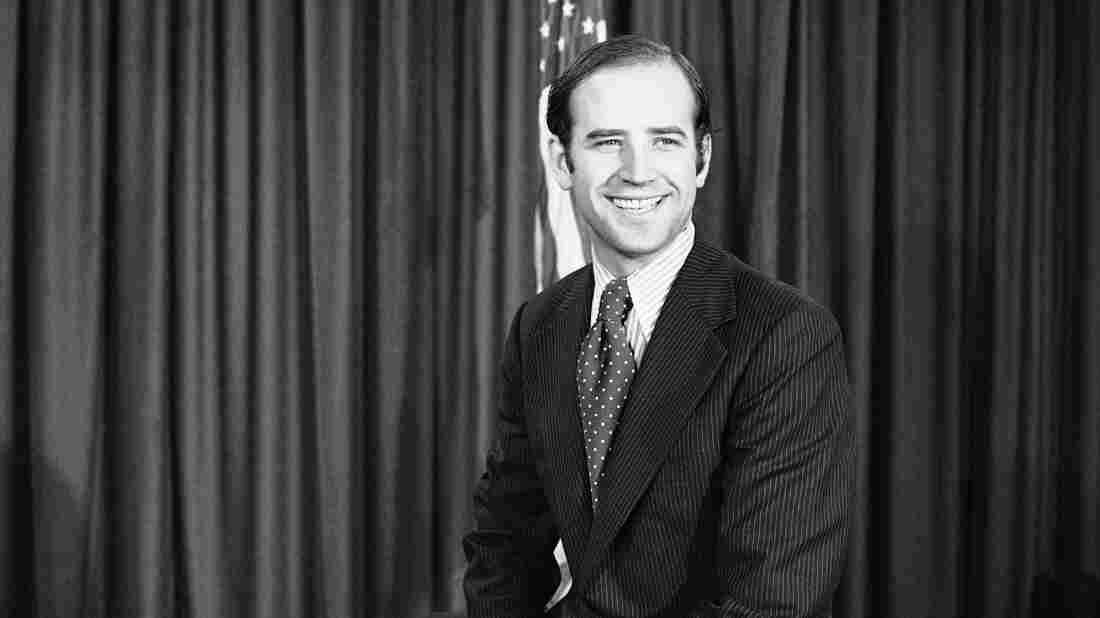 Sen. Joseph Biden of Delaware, seen in 1975, told NPR at the time that he supported a constitutional amendment to ban court-ordered busing programs to integrate schools.

Sen. Joseph Biden of Delaware, seen in 1975, told NPR at the time that he supported a constitutional amendment to ban court-ordered busing programs to integrate schools.

In 1975, one of the most divisive cultural and political issues of the time was busing, the practice of putting black and white children on buses and sending them to different schools within a school district to achieve integration.

Factoring prominently into the debate against busing, however, was a young, liberal, 32-year-old Delaware senator by the name of Joe Biden.

Asked in an interview at the time by NPR’s David Ensor whether he would go so far as supporting a constitutional amendment to stop court-ordered busing, Biden was open to it.

“That would clearly do it,” he said, adding, “I’m going to go at it through a constitutional amendment, if it can’t be done through a piece of legislation.”

Here’s the full quote from the transcript:

ENSOR: What about a constitutional amendment, I asked Biden. Isn’t that what you’re going to end up supporting if you want to stop court ordered busing too?

BIDEN: That would clearly do it. We are trying to figure out whether or not we can come up with an innovative piece of legislation which would limit the remedy and I don’t honestly don’t know whether we can come up with something constitutional. And if we can’t I will not in an attempt to eliminate busing violate the Constitution. I won’t do that. The only way if I’m going to go at it, I’m going to go at it through a constitutional amendment if it can’t be done through a piece of legislation.

Biden also warned in the interview that one of the reasons many liberals were in favor of busing is that racists were against it.

“I think that part of the reason why much of this has not developed, much of the change has not developed, is because it has been an issue that has been in the hands of the racist,” Biden said, “and we liberals have out-of-hand rejected it because, if George Wallace is for it, it must be bad. And so we haven’t really looked at it. Now there’s a confluence of streams. There is academic ferment against it — not majority, but academic ferment against it. There are young blacks and young white leaders against it.”

The Biden campaign has not yet responded to a request for comment.

The issue of busing has threatened to derail Biden’s campaign after he came under attack from Sen. Kamala Harris of California at Thursday night’s debate. Harris noted that she was bused as a child and was hurt by Biden’s handling of remarks he made that he worked with segregationist senators with whom he disagreed.

On Friday, Biden took another shot at defending himself, speaking in Chicago before the Rainbow PUSH Coalition, headed by the Rev. Jesse Jackson.

“I heard and I listened to and I respect Sen. Harris,” Biden said. “But you know we all know that 30 seconds to 60 seconds on a campaign debate exchange can’t do justice to a lifetime committed to civil rights.”

He added: “I never, never, never, ever opposed voluntary busing, [such] as the program that Sen. Harris participated in, and it made a difference in her life. I did support federal action to address the root causes of segregation in our schools and in our community, including taking on the banks and redlining, and trying to change the way in which neighborhoods were segregated.

“I’ve always been in favor of using federal authority to overcome state-initiated segregation. In fact, I cast the deciding vote in 1974 against an amendment called the Gurney amendment, which would have banned the right of federal courts to be able to use busing as a remedy [to segregation].”

During the debate, Biden also said he was not against voluntary busing, only Department of Education-mandated busing. It sounded like a states-rights argument, similar to what had been used by those who wanted to keep segregation in place. But on Friday, Biden rejected that.

“These rights are not up to the states to decide,” he said. “They’re the federal government’s duty to decide. It’s a constitutional question, to protect the civil rights of every single American. And that’s always been my position.”

Busing was a hotly divisive issue in the 1970s.

It was unpopular with white families and even divided black families.

Americans thought other policies should be focused more on and would do a better job of achieving school integration, like changing school district boundaries to bring together students from different social, racial and economic groups (27%) or that there should be more affordable housing in middle-class neighborhoods (22%).

Even nearly three-quarters of younger respondents in 1999 — ages 18 to 29, who might have gone through busing themselves and who thought integration programs were beneficial — said letting children attend neighborhood schools would be better than busing. (Harris would have been 35 in 1999; Biden was 57.)

A 1971 Gallup Poll found that fewer than half of Americans (43%) thought integration programs had improved the quality of education for black students. By 1999, though, 80% of those younger respondents thought they worked. In other words, the generational divide is real.

In 1974, the Supreme Court weighed in on busing and “white flight,” which saw white families abandon the cities for the suburbs. In Milliken v. Bradley, the court struck down a plan to desegregate Detroit public schools by having white children, who lived in the suburbs, integrated into inner-city schools.

The court said that was “wholly impermissible” and emphasized the importance of local control over public schools — and “white flight” only continued.