Nadler repeats faulty claim, corrected by Mueller, about why Trump was not indicted – Fox News 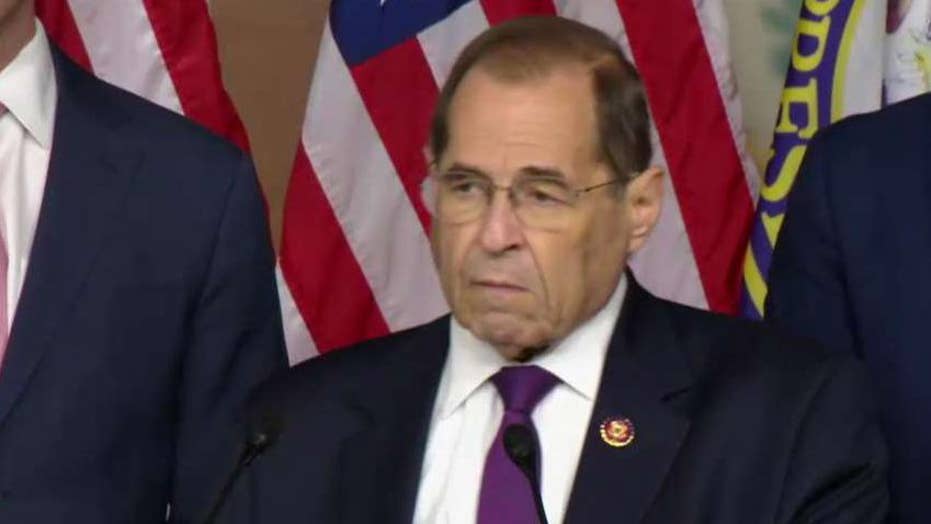 House Judiciary Committee Chairman Jerry Nadler repeated a faulty claim Friday – which was corrected by former Special Counsel Robert Mueller during his testimony earlier this week – about why President Trump wasn’t indicted in the Russia probe.

During a Democratic press conference about Mueller’s testimony, Nadler, a New York Democrat, claimed Mueller said the only reason Trump wasn’t indicted for obstruction of justice was because of a Justice Department opinion prohibiting charging a sitting president with a crime. He cited Mueller’s response to a question from House Judiciary Committee member Rep. Ted Lieu, D-Calif.

“He told us in a remarkable exchange with Mr. Lieu that but for the Department of Justice policy prohibiting [him] from doing so, he would have indicted President Trump,” Nadler said. “Indeed it is clear that any other citizen of this country who has behaved as this president has would have been charged with multiple crimes.”

But on Wednesday, Mueller himself went out of his way to clarify that he didn’t intend to suggest that.

“I want to add one correction to my testimony this morning,” Mueller told the House Intelligence Committee, after testimony before the Judiciary Committee earlier Wednesday. “I want to go back to one thing that was said this morning by Mr. Lieu, who said and I quote, ‘You didn’t charge the president because of the OLC opinion.’ That is not the correct way to say it. As we say in the report and as I said at the opening, we did not reach a determination as to whether the president committed a crime.”

Earlier in the day, Democrats thought Mueller had delivered a bombshell during his exchange with Ted Lieu. “The reason that you did not indict the president is because of the OLC opinion that you cannot indict a sitting president, correct?” Lieu asked Mueller. He responded, “Correct.”

But Mueller, in his clarification, sought to convey that the OLC opinion kept him from even deciding if an indictment would be warranted in the first place.

There has been great interest in the role the OLC’s policy played in Mueller’s decision not to bring charges.

In a March summary of the Mueller report – before a redacted version was released to the public – Attorney General Bill Barr said he and Deputy Attorney General Rod Rosenstein concluded that there wasn’t adequate evidence to establish that Trump committed obstruction of justice offense. Barr said that determination was made without regard to the OLC opinion.

Barr also told reporters that he had met with the special counsel about the report and “Mueller stated three times to us in that meeting in response to our questioning that he emphatically was not saying that but for the OLC opinion, he would have found obstruction.”

But in May, Mueller delivered a public statement about his probe and said that “charging the president with a crime was not an option we could consider,” raising questions about whether he would have indicted Trump if not for the opinion.

This prompted a round of clarifying statements from both the Justice Department and Mueller’s team, saying Barr and Mueller did not contradict each other.

“The attorney general has previously stated that the Special Counsel repeatedly affirmed that he was not saying that, but for the OLC opinion, he would have found the President obstructed justice,” read a joint statement from DOJ spokeswoman Kerri Kupec and Mueller spokesman Peter Carr at the time. “The special counsel’s report and his statement today made clear that the office concluded it would not reach a determination – one way or the other – about whether the president committed a crime. There is no conflict between these statements.”