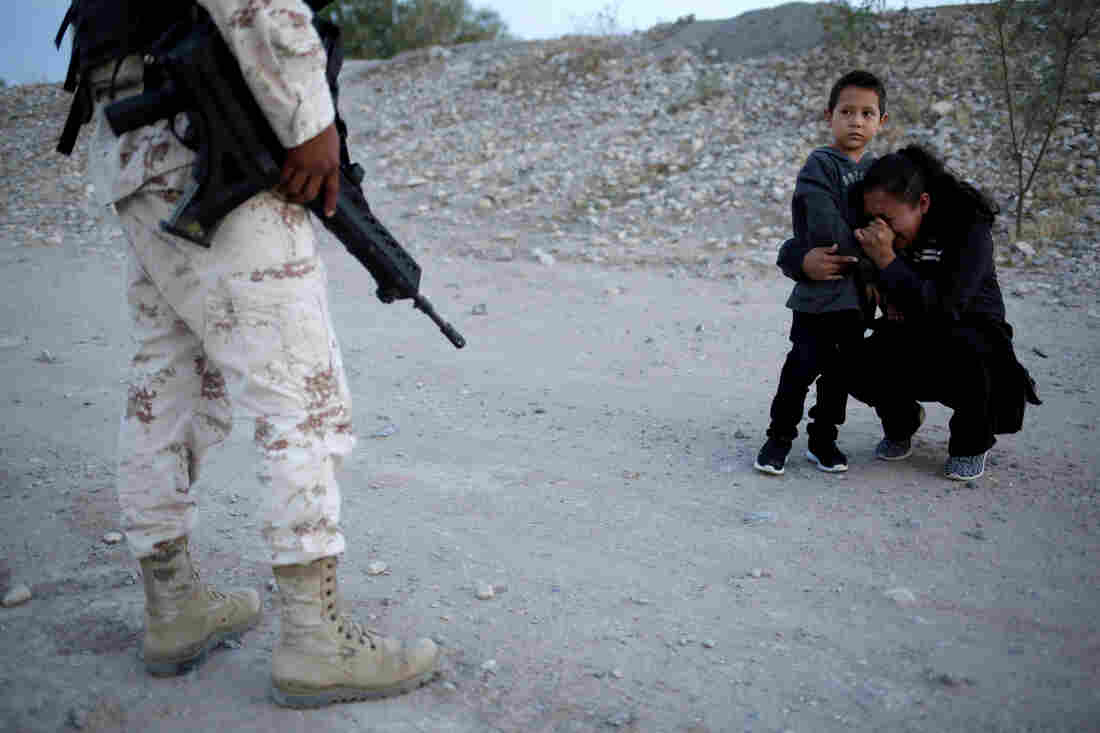 Guatemalan migrant Lety Perez embraces her son Anthony while pleading with a Mexican National Guard member to let them cross into the United States, near Juárez, Mexico, on Monday.

Guatemalan migrant Lety Perez embraces her son Anthony while pleading with a Mexican National Guard member to let them cross into the United States, near Juárez, Mexico, on Monday.

A picture of an armed Mexican National Guard soldier impeding a crying migrant mother and her child from getting to the United States is spreading on social media and making headlines in Mexico.

In the photo taken by Reuters, the soldier stands on a dry riverbed between the Mexican city of Juárez and El Paso, Texas. He holds a firearm pointed toward the ground. The woman weeps and clutches her young son.

In a video of the scene published Wednesday by Mexico’s El Universal newspaper, the woman pleads with the National Guard to let her and the boy pass into the U.S.

“Let me pass, I beg of you,” the woman, identified as Lety Perez of Guatemala, repeatedly sobs. “Don’t let them send me back, I just want to give my son a better life,” she says.

Former Mexican Ambassador to the U.S. Arturo Sarukhán tweeted the photo, calling it the “pic du jour.” (He attributed the image to the news site Axios, which featured the photo on Tuesday.)

Sarukhán served under President Felipe Calderón. Calderón retweeted the post and added, “what a shame! The government of Mexico shouldn’t have accepted this.”

Former President Calderón has been an outspoken critic of the current leader’s stepped up immigration policies.

Last month, President Trump threatened to slap tariffs on goods from Mexico if the country did not take action to prevent migrants from crossing its border into the U.S. President López Obrador, a longtime defender of migrants’ rights, quickly capitulated, sending nearly 21,000 members of the newly formed National Guard to both the southern and northern Mexican borders.

Foreign Minister Marcelo Ebrard told reporters on Monday that in the six weeks since Mexico agreed with the U.S. to ramp up border enforcement, the number of migrants reaching the U.S. has dropped by more than 36%.

But critics condemn López Obrador’s administration for succumbing to Trump’s threats and doing what many have called the U.S.’ dirty work.

When contacted by NPR, former Ambassador Sarukhán said the two countries must share responsibility over the border and that Mexico must improve its control. But, he added in an email, “no country, be it the U.S. or Mexico, can enforce its way out of an immigration crisis without addressing the root causes for Central American transmigration to the U.S. via Mexico.”

President López Obrador has defended his policy, telling reporters on Wednesday that it “respects human rights, supports productive activities and attention to the causes of migration.” His administration has proposed a development and reforestation plan for much of Central America, urging the U.S. and the European Union to contribute hundreds of millions of dollars to the effort.

Many Mexicans support tougher immigration enforcement, even if it is driven by pressure from the U.S. and President Trump’s tariff threats.

In a recent poll conducted by the Mexican newspaper Reforma and The Washington Post, 6 out of 10 surveyed say migrants are a burden on the country. Fifty-five percent say they support deporting Central Americans caught transiting Mexico to the U.S.

Sarukhán says such growing sentiments are worrisome. “Many Mexicans need to take a hard look in the mirror. The creeping and heartless xenophobia in Mexico is unacceptable and incongruous for a country that has 5 million undocumented migrants in the U.S.,” he wrote in an email.

The Reuters photo is just the latest image to draw wide attention to the plight of Central American migrants.

The National Guard member seen in the image is standing in the Guatemalan women’s path. Under orders, the military is not allowed to apprehend migrants, only to call for an immigration agent if a detention is necessary, as NPR reported last week.

While in the encounter between the soldier and migrants, it appeared that the National Guardsman followed those orders. However, later in the El Universal video, the woman and her child are showed crossing the dry brush-filled riverbed toward El Paso, where several U.S. Customs and Border Protection vehicles are waiting in the distance.