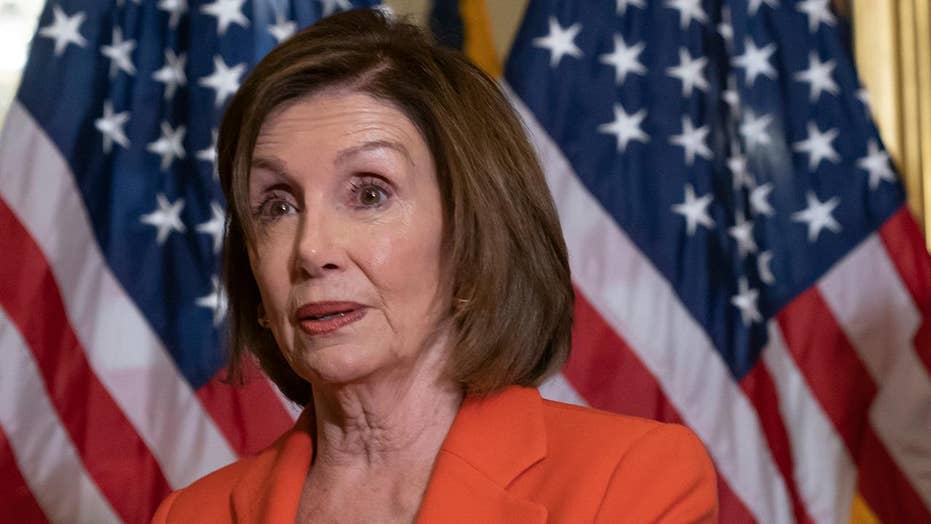 The musical stylings of Weird Al Yankovic rarely offer clarity about the state of legislation in Congress.

But Weird Al’s 1984 hit “Eat it” (a parody on Michael Jackson’s “Beat It”) was inadvertently invoked this past week to crystallize the conundrum facing House Democrats after the Senate approved a crucial border spending bill 84-8.

House liberals were either going to hold out against the Senate measure in favor of their own – or accept the Senate bill.

Amid these deliberations, former Senate Republican Leader Trent Lott, a veteran of such impasses, ambled by the Speaker’s Office late Wednesday afternoon as a coterie of reporters stood watch in the hallway. Lott advised that if he were still running the Senate – where the overwhelming 84-8 vote spoke volumes – there would be only one clear path.

It’s exactly what they did.

But not without a fiery fight first within the House Democratic Caucus – and one that threatens to keep burning for weeks and months to come.

House Speaker Nancy Pelosi faced a huge challenge as she sought to both assuage the concerns from her left flank and engineer a bill that could actually pass.

The House had approved its own version of the border legislation Tuesday night, 230-195. But the Senate devised a different, more bipartisan piece of legislation. Not as many controls and consequences for those charged with caring for children. Senate Appropriations Committee Chairman Richard Shelby, R-Ala., wrote the measure alongside Sen. Patrick Leahy, D-Vt., the top Democrat on the panel. The committee approved the bill 30-1. The Senate then followed suit with a staggering roll call tally of 84-8.

“The administration opposes what the House is going to do,” said Senate Majority Leader Mitch McConnell, R-Ky. “We believe they support what we’re going to do.”

The House and Senate were out of alignment, approving competing bills. The front-runner for final passage, though, was fairly evident: The Senate bill secured more than 60 yeas, making it filibuster-proof, while the White House threatened to veto the House measure.

The House still held out hope, engineering a revised bill on Thursday as the plan came back across the Capitol from the Senate.

But the administration wouldn’t budge. McConnell wouldn’t budge. Things looked bleak for the House bill, even as it was apparent the House could approve the Senate version with most Republicans and many Democrats.

But Democrats faced a more immediate problem as the House began a pre-debate on the revamped measure Thursday afternoon. House rules allow members to vote on something called “adopting the previous question.” In short, it’s known as a “PQ.” If the House approves the PQ, things continue as normal. However, if the House defeats the PQ, the minority seizes control of the floor for an hour and gets to call up whatever legislation it wants. The majority rarely loses a PQ vote. The House hasn’t defeated a PQ (thus, turning over the floor to the other side) since 2010. If Republicans defeated the PQ, they would bring up the Senate bill. Losing control of the floor in such a fashion would be a major embarrassment for Democrats. But this was a distinct possibility. There was near unanimity on the GOP side for the Senate plan and dozens of Democrats were prepared to join them.

So, the House Democratic brain trust changed course. Pelosi dashed off a letter to her colleagues.

“The children come first,” wrote Pelosi. “We have to make sure that the resources needed to protect the children are available. Therefore, we will not engage in the same disrespectful behavior that the Senate did in ignoring our priorities. In order to get resources to the children fastest, we will reluctantly pass the Senate bill.”

So, the Senate jammed the House. And Pelosi relented because the math simply wasn’t on her side.

The House ultimately moved the Senate package 305-102. Pelosi lost 95 Democrats. But there were 129 Democratic yeas. So, despite the sniping from the liberal wing of the Democratic caucus, Pelosi still marshaled a majority of the majority. But Pelosi couldn’t get to 217 yeas (the magic number in the House right now to pass bills) exclusively on the Democratic side.

That’s the same issue that tormented former House Speakers John Boehner and Paul Ryan. They couldn’t quite move some bills with only GOP support when Republicans were in the majority. This was mostly due to protestations from the House Freedom Caucus. So, Boehner and Ryan often turned to the other side for assistance to pass major legislation. Pelosi did the same Thursday.

In a statement, the Congressional Hispanic Caucus said “what happened today is unacceptable and we will not forget this betrayal.”

A number of moderate Democrats privately vented their frustrations about the internecine warfare among Democrats. One Democrat said it would be “shameful” and “immoral” not to do “something.” Another moderate Democrat groused about liberals placing a premium on “ideological purity.” One Democrat noted that a yes vote on the more tempered Senate bill was a good vote for moderate and conservative Democrats who face tough races in 2020. After all, members from swing districts are why Democrats won the House.

One senior House Democratic leadership source told Fox News that some liberals will understand why Pelosi did what she did. But the source noted that many far-left Democrats “won’t get it. They’ll keep pushing.” The source said some Democrats will take notice of Pelosi fighting for the original House bill and only losing four Democrats. But the leadership source also suggested that Pelosi should have taken one more run at the issue. Perhaps pass the re-retooled bill, forcing McConnell to flush it back to the House and then accepted the Senate package.

This could be a seminal moment for Democrats. Is their tent big enough to accept both liberals and moderates? This is a distillation of what’s going on nationally in the presidential sweepstakes. Democrats may control the House. But they don’t have the Senate, or the White House. And while the bill may not be perfect, it was the right measure for most Democratic districts. By the same token, a no vote was likely the proper disposition for lawmakers representing the most liberal of districts.

Earlier in the week, Rep. Tony Cardenas, D-Calif., was asked if the “perfect was the enemy of the good” in the border bill negotiations.

“I hate that expression,” said Cardenas. “You don’t want to settle for less than what you’re capable of.”

Many liberal Democrats may agree with Cardenas’s assessment. Otto von Bismarck famously compared passing law to making sausage. And as both Weird Al, Trent Lott and many House Democrats now know, you sometimes just have to eat it.