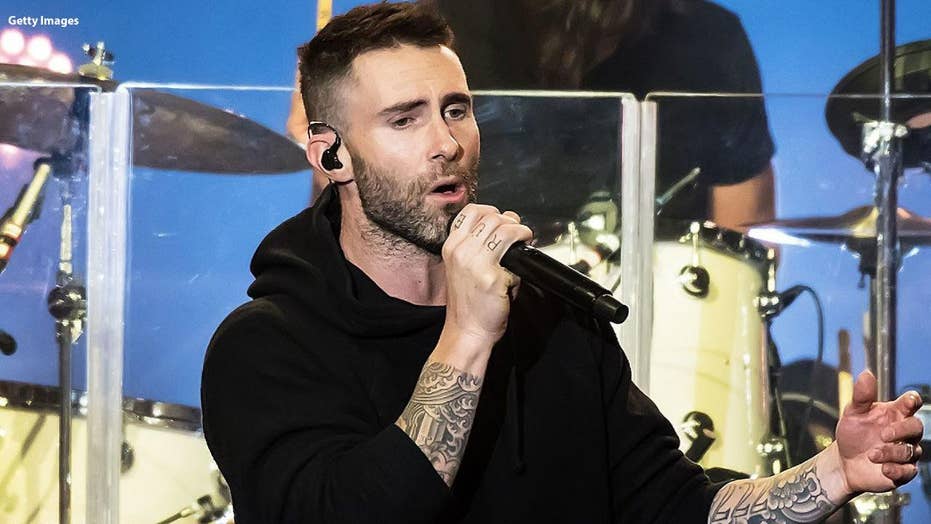 The show opened with pyrotechnics and the band’s first hit, “Harder to Breathe” ahead of a stage in the shape of a glowing “M” and “V.”

The group then launched into “This Love,” with Levine removing his black trench coat, with Levine playing an extended guitar solo.

The band teased “SpongeBob Squarepants” song “Sweet Victory” before Scott entered with a slew of fireballs and pyrotechnics. Much of his rap verses from his hit “Sicko Mode” were censored for expletives. Scott concluded his portion of the performance by stage diving into the crowd.

After Scott’s interlude, Maroon 5 took the spotlight once more for “Girls Like You” with a drum line and a gospel choir, all of whom wore blue.

“She Will Be Loved” followed, with the arena lighting up with glowing lanterns.

Atlanta native Big Boi then entered in a convertible, rocking a fur coat to perform “The Way You Move” with Levine singing the hook with Sleepy Brown.

After Big Boi’s exit, Levine stripped off his sweater to perform “Sugar.”

The crowd went wild for “Moves Like Jagger” — and for Levine’s tattooed, shirtless visage that came with it.

The show closed with a guitar solo and fireworks, with the band hugging Scott and Big Boi before making their exits.

The band faced a slew of backlash since agreeing to perform at the Super Bowl, including petitions to get them to back out in solidarity with Colin Kaepernick’s kneeling during the national anthem in protest against police brutality and racial oppression.

Levine, 39, said Friday of Maroon 5’s decision to perform, “No one thought about it more than I did. No one put more thought and love into this than I did. … I spoke to many people, most importantly though, I silenced all the noise and listened to myself, and made my decision about how I felt.”

On Friday, Kaepernick’s attorney, Mark Geragos, slammed Levine and the band, calling their performance and Levine’s comments a “cop-out.”

“If you’re going to cross this idealogical or intellectual picket line, then own it, and Adam Levine certainly isn’t owning it,” Geragos said. “It’s a cop-out when you start talking about, ‘I’m not a politician; I’m just doing the music.’ Most of the musicians who have any kind of consciousness whatsoever understand what’s going on here.”

Artists including Cardi B and Rihanna declined to perform at halftime in solidarity with Kaepernick.