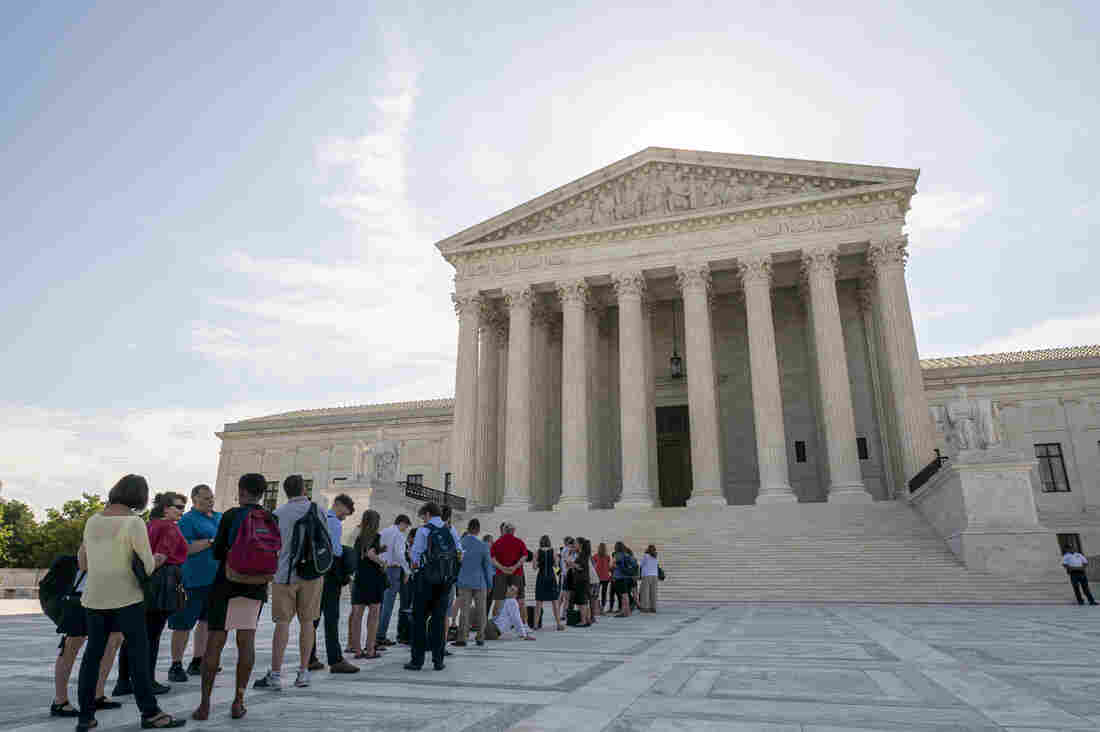 Visitors lined up at the Supreme Court in Washington, D.C., on Monday morning as the justices prepared to hand down decisions.

Visitors lined up at the Supreme Court in Washington, D.C., on Monday morning as the justices prepared to hand down decisions.

With less than two weeks left in the U.S. Supreme Court term, the justices handed down four decisions on Monday. Defying predictions, three were decided by shifting liberal-conservative coalitions.

Here, in a nutshell, are the results, as well as the fascinating shifting votes:

By a 7-2 vote, the court reaffirmed its 100-year-old rule declaring that state governments and the federal government may each prosecute a person separately for the same crime, without violating the Constitution’s double jeopardy clause. Dissenting were the court’s leading liberal justice, Ruth Bader Ginsburg, and one of its most conservative justices, Neil Gorsuch.

Racial gerrymandering case thrown out with a mix of liberals, conservatives

Spurning pleas from Virginia Republicans, the court let stand decisions by lower courts finding that 11 state house districts were racially gerrymandered in violation of the Constitution. The Supreme Court said the Republican-dominated state House had no legal standing to appeal to the Supreme Court on its own when the state senate and the state attorney general had decided against appealing.

The court upheld Virginia’s ban on Uranium mining. By a 6-to-3 vote, the justices said that the state law was not superseded by the federal Atomic Energy Act (AEA).

Writing for the court majority, Justice Gorsuch said the AEA gives the federal government the authority to regulate nuclear safety, but not the authority to regulate mining itself. Fellow conservatives Thomas and Kavanaugh joined the Gorsuch opinion in full, but liberal Justices Ginsburg, Sotomayor, and Kagan agreed only with his bottom line. They refused to sign on to Gorsuch’s broad language about matters that they said “sweep well beyond the confines of this case.”

Dissenting were Chief Justice Roberts and Justices Breyer and Alito.

The only classic conservative-liberal split on Monday came in a case testing whether a private corporation that runs a public access TV channel in New York City is a public forum that, like a public park, cannot discriminate against speakers.

The court, by a 5-to-4 vote, concluded that the public access channel here was owned by Time Warner, not by the city. And because it was privately owned, the channel could not be sued for refusing to air a movie.

Justice Kavanaugh wrote the decision for the five conservative justices, declaring that “[M]erely hosting speech by others is not a traditional, exclusive public function.”

Therefore, channel operators cannot be sued for violating the First Amendment guarantee of free speech. At first blush, at least, the decision would seem to preclude First Amendment lawsuits against private platform operators, like Twitter and Facebook, though Kavanaugh warned that the decision should not be read “too broadly.”

On Thursday, the court is expected to hand down more of the 20 remaining decisions on its docket. Among those are the three blockbuster cases of the term:

These three decisions (and 17 others) remain in the wings.