Trump says no preconditions to talks with Iran; warns war would lead to ‘obliteration’ – Fox News 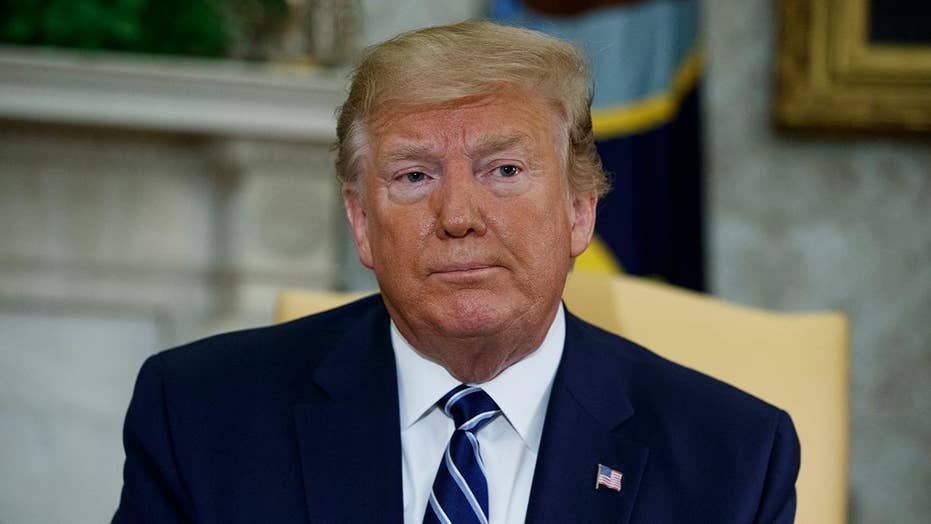 President Trump has expressed his willingness to open talks with Iranian officials without any preconditions – saying that he doesn’t want a war with the Islamic Republic, but if it comes down to an armed conflict it will be “obliteration like you’ve never seen before.”

In an interview that aired Sunday on NBC’s “Meet The Press,” Trump said the only line he was drawing in the sand when it came to discussions with Iran was that the country could not have a nuclear weapon.

“I’m not looking for war and if there is, it’ll be obliteration like you’ve never seen before,” Trump said. “But I’m not looking to do that. But you can’t have a nuclear weapon. You want to talk? Good. Otherwise you can have a bad economy for the next three years.”

Trump’s interview, which was conducted on Friday, came just hours after he announced on Twitter that he had called off a retaliatory strike on Thursday night following the downing of an unmanned U.S. drone by Iran.

When questioned why he called off the strike at the last minute, Trump said he thought the loss of life that would have occurred in Iran was “not proportionate to shooting down an unmanned drone.”

“I thought about it for a second and I said, ‘You know what? They shot down an unmanned drone, plane, whatever you want to call it. And here we are sitting with 150 dead people that would have taken place probably within a half an hour after I said go ahead,” Trump said. “And I didn’t like it. I didn’t think it was, I didn’t think it was proportionate.”

The president noted that instead of a military strike, his administration plans to ratchet up the already hefty sanctions on Iran.

“We’re increasing the sanctions now,” he said. “The response is always going to be very strong.”

Along with the sanctions, the U.S. on Thursday reportedly launched a series of cyberattacks that disabled Iranian Revolutionary Guard Corps computer systems that controlled its rocket and missile launchers.

US NAVY DRONE SHOT DOWN BY IRANIAN MISSILE OVER STRAIT OF HORMUZ IN ‘UNPROVOKED ATTACK,’ CENTRAL COMMAND SAYS

The president’s openness to talk with Iran was countered on Sunday by  National Security Adviser John Bolton, who said in a speech Sunday in Jerusalem that Iran should not “mistake U.S. prudence and discretion for weakness.”

Bolton’s tough message seemed to be aimed not only at Tehran, but also at reassuring key U.S. allies that the White House remains committed to maintaining pressure on Iran. Israel, along with Arab countries in the Gulf, considers Iran to be their greatest threat, and Trump’s last-minute about-face appears to have raised questions about U.S. willingness to use force against the Islamic Republic.

On Sunday, Iranian President Hassan Rouhani blamed the United States’ “interventionist military presence” for fanning the flames. He was quoted by the official IRNA news agency.

“The region is very sensitive and security of the Persian Gulf and Gulf of Oman waterways is important to many countries. We expect international bodies to show proper reaction to the invasion move,” Rouhani said about the downing of the U.S. drone.

Iran’s foreign minister also said Bolton was trying to force the U.S. into a conflict with Iran. Javad Zarif tweeted that the presidential adviser was “moments away from trapping” Trump into a “war,” before the U.S. president called off the strikes against Iran.

The response to Iran’s downing on a U.S. drone has highlighted a growing divide between Trump and his national security adviser.

In his interview on “Meet The Press,” Trump said that Bolton was “absolutely a hawk,” but added that he wanted “hawks” and “doves” equally represented in his administration.

“If it was up to [Bolton] he’d take on the whole world at one time, okay? But that doesn’t matter because I want both sides,” Trump said.