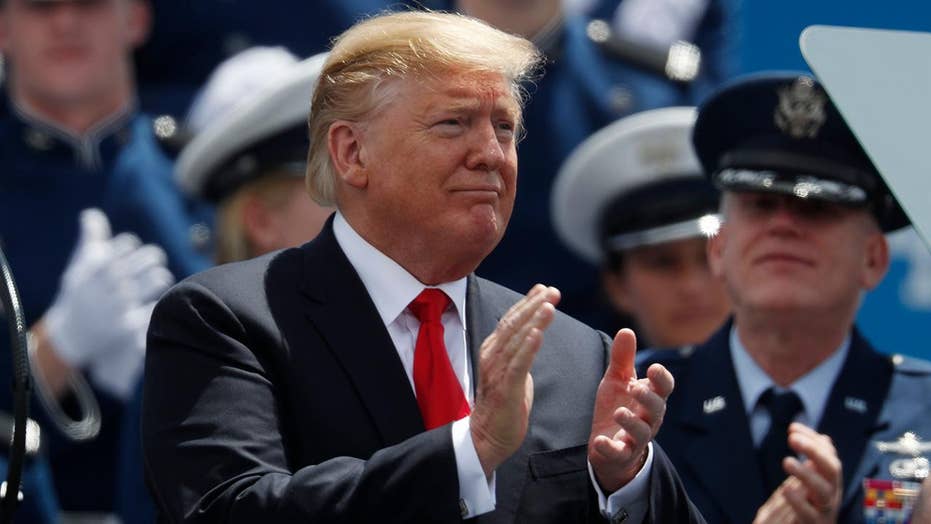 President Trump took a swipe Tuesday night at Senate Minority Leader Chuck Schumer, D-N.Y.,  who said he believes Trump ultimately will back down on the threat of tariffs on all goods coming into the U.S. from Mexico.

“Can you imagine Cryin’ Chuck Schumer saying out loud, for all to hear, that I am bluffing with respect to putting Tariffs on Mexico. What a Creep. He would rather have our Country fail with drugs & Immigration than give Republicans a win. But he gave Mexico bad advice, no bluff!” Trump tweeted.

Trump has vowed to impose a 5 percent tariff on Mexican imports next week unless the country does more to stem illegal migration.

The president last week threatened to impose the monthly tariff which would rise to a total of 25 percent by October.

“Frankly, I don’t believe that President Trump will actually go through with the tariffs,” Schumer said on the Senate floor. “President Trump has a habit of talking tough and then retreating, because his policies often can’t be implemented or don’t make sense… so I wouldn’t be surprised at all if President Trump doesn’t follow through on these tariffs, either.”

It is unclear what more Mexico could do — and what would be enough — to satisfy Trump on illegal immigration, a signature issue of his presidency.

The United States has not presented concrete benchmarks to assess how sufficient the U.S. ally would be stemming the migrant flow from Central America. Mexican officials have called the potential tariffs hurtful to the economies of both countries and useless to slow the northbound flow of Central American migrants.

Lawmakers and business allies have worried publicly that the tariffs would derail the long-promised United-States-Mexico-Canada Agreement (USMCA) — a rewrite of the North American Free Trade Agreement (NAFTA) that Trump had promised to replace.

Trump has indicated he will rely on the International Emergency Economic Powers Act, a national emergency executive action he can take without congressional approval.

All sides, including officials from Mexico meeting with Trump negotiators in Washington this week, have remained hopeful that high-level talks would ease the president away from his threat. But, with the tariffs set to start next Monday, some Republicans in Congress have warned the White House they’re ready to stand up to Trump.