A fall is defined as “an event which results in a person coming to rest inadvertently on the ground or floor or other lower level.”1 According to the Centers for Disease Control and Prevention, millions of adults 65 years and older fall each year.2 The number of falls increases with age, regardless of sex and ethnicity3 (Figure). Falls may threaten the independence of elderly adults and lead to substantial financial costs; they can lead to such serious injuries as hip fractures and head traumas, and are the seventh leading cause of death for this age group.4

Worldwide, the proportion of adults 60 years and older is growing faster than any other age group.5 Thus, effective interventions need to be identified to prevent and/or delay falls among the elderly. Vitamin D supplementation has been studied as a possible intervention for reducing this risk.

The role of vitamin D in fall prevention has been evaluated in multiple trials and is mentioned in various guidelines and organizations. Vitamin D is a fat-soluble vitamin that typically exists in some foods but is also available as a dietary supplement.6 Additionally, it is made by the body once the skin is exposed to UV rays from sunlight .Vitamin D promotes calcium absorption and enables normal bone mineralization by maintaining sufficient serum calcium and phosphate concentrations.6 A positive association between 25-hydroxyvitamin D (25-OHD) levels and lower-extremity musculoskeletal function in older adults has fueled interest to further explore the possible effects on preventing falls.7 Older adults are at a higher risk for vitamin D deficiency, which is commonly defined as serum 25-OHD less than 30 ng/mL. Possible etiologies include less efficient synthesis of vitamin D in the skin, less sun exposure, and a potentially inadequate dietary intake of vitamin D.6

Per the Institute of Medicine panel, the recommended dietary allowance of vitamin D is 600 IU daily for all ages up to 70 years and 800 IU after the age of 70.8 The United States Preventative Services Task Force recommends exercise or physical therapy and vitamin D supplementation to prevent falls in community-dwelling adults at risk for them (grade B) who are at least 65 years.9 The American Geriatrics Society (AGS) recommends 800 IU/day in older adults with a proven vitamin D deficiency (grade A) and consideration of supplementation in those with suspected vitamin D deficiency or at increased risk for falls (grade B).10 These recommendations are based on trials that have assessed the effects of vitamin D on preventing falls in the elderly. The summary of the guideline recommendations can be found in Table 1. See Table 2 for a summary of the following trials.

This was a randomized controlled trial of 3314 women 70 years and older with 1 or more risk factors for hip fracture who were randomized into 2 groups: the patients received either (1) 1000 mg of calcium plus 800 IU of vitamin D3 and an informational leaflet on dietary calcium intake and prevention of falls or (2) the leaflet only. No baseline serum 25-OHD levels were taken. The primary outcome was fractures, not including those of digits, rib, face, and skull. Secondary outcome measures included hip fracture, quality of life, visits to the doctor and hospital admissions, death, falls, and fear of falling. There was no significant difference in any of the primary or secondary outcomes.

A 3-year, randomized controlled trial of 445 participants who were assigned to either vitamin D3 (cholecalciferol) 700 IU/day plus calcium citrate malate 500 mg/day or placebo. The groups were stratified according to race, sex, and decade of age. The primary end point of the original trial was bone mineral density. This particular analysis studied the risk of falling at least once during follow-up, which was the secondary outcome of the original trial; the original trial was powered to assess bone mineral density. The average age was approximately 71 years, with a mean 25-OHD of 26.7 ng/mL in women and 33 ng/mL in men. The results for the total sample showed that during the 3-year follow-up period, the cholecalciferol-calcium intervention did not significantly reduce the odds of falling compared with the placebo (OR 0.77; 95% CI, 0.51-1.15); however, when analyzed by sex, the odds of falling in this group were significantly reduced among women (OR 0.54; 95% CI, 0.30-0.97), specifically less active women (OR 0.35; 95% CI, 0.15-0.81). There was no significant reduction among men.

A 1-year, double-blind, randomized controlled trial included 302 community-dwelling women aged 70 to 90 years living in Perth, Australia. The participants were randomized to receive vitamin D2 (ergocalciferol) 1000 IU/day or placebo, and both groups received calcium citrate 1000 mg/day. The average age of the total sample was approximately 77 years, with a baseline 25-OHD of approximately 18 ng/mL, with height being the only significant difference (P <.05). The primary outcome was the number of falls recorded. After adjusting for differences in height between the 2 groups, there was a significant reduction in the odds of falling in the ergocalciferol group compared with the control group, which equated to a 19% relative risk reduction.

In this 20-month, double-blind, controlled trial, 242 healthy ambulatory adults 70 years and older were assigned to either elemental calcium 500 mg plus cholecalciferol 400 IU twice daily or elemental calcium 500 mg twice daily (control group). The study treatments were stopped at month 12, and participants were followed for 8 more months. The primary outcome measured was the occurrence of falls recorded by diary. By month 20, 40% of participants had at least 1 fall in the treatment group compared with 63% in the control group (P <.01). This study also assessed quadriceps strength, body sway, and timed-up-and-go (TUG) test. Both TUG and quadriceps strength had a significant difference in favor of the treatment group, but no significant difference in body sway. 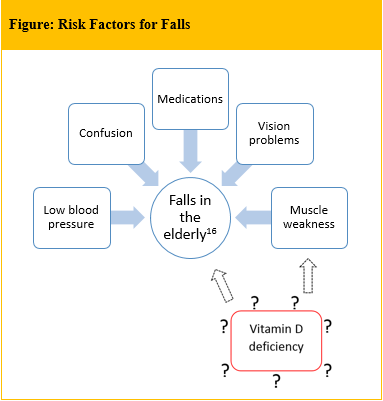 Older adults are more likely to be vitamin D–deficient and have a higher risk for falls. However, due to the various and conflicting results from the trials summarized above, it is difficult to pinpoint the exact role of vitamin D supplementation in fall prevention. Many variables, such as dose, variation in fall reporting, diet, serum vitamin D levels, and geographic location, can make the results challenging to compare and draw conclusions from.

It is important to consider other factors that could put an older adult at risk for falls, such as medications, low blood pressure, and vision problems (Figure).16 Even though vitamin D is a relatively benign supplement, it is imperative to remember that toxicity is possible because it is a fat-soluble vitamin. Serum levels should be assessed routinely, particularly if a patient is on high-dose vitamin D supplementation. Recommendations should be made after assessing patients individually, as each older adult is unique.