‘Back in the 60s that wasn’t considered racist': Senator defends Trump’s attacks on congresswomen – Daily Mail

‘Back in the 60s that wasn’t considered racist': Republican senator defends Trump’s attacks on minority congresswomen

Ron Johnson, a Republican senator from Wisconsin, defended on Sunday Donald Trump‘s attacks on a group of minority freshmen lawmakers as something that would have been accepted in the 1960s.

Johnson is making reference to a tweet Trump sent this week telling people if they don’t like America they are free to leave and go somewhere else.

‘I would say in general the whole, ‘America: love it or leave it’ is not a new sentiment,’ Johnson, who was born in 1955, told CNN‘s Dana Bash Sunday morning. ‘You know, back in the ’60s that wasn’t considered racist.’

Trump’s attacks toward a group of four freshmen representatives, who call themselves ‘the squad,’ gained more heat on Sunday when he told the minority women they should ‘go back’ and fix their countries of origin. 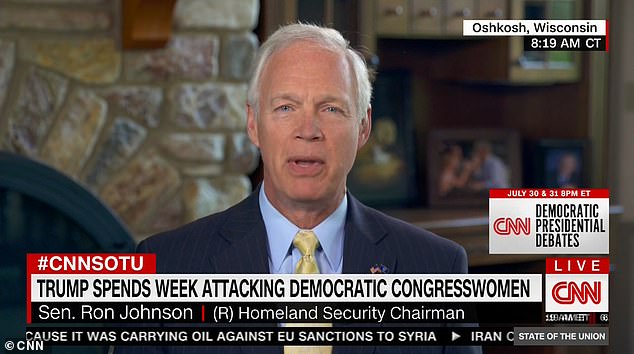 Wisconsin Senator Ron Johnson said Trump’s comments would not have been seen as racist in the 1960s, and suggested America is moving backwards in terms of the discussion around race 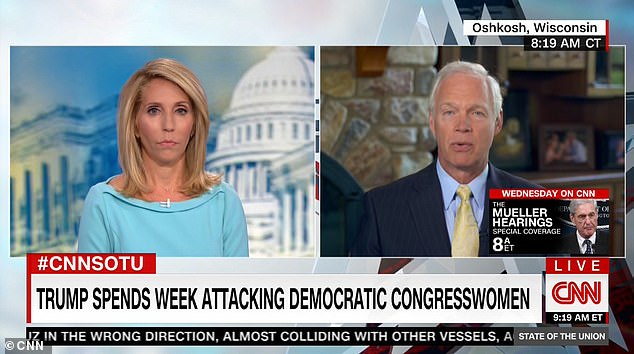 ‘I would say in general the whole, ‘America: love it or leave it’ is not a new sentiment,’ Johnson, told CNN’s Dana Bash Sunday morning. ‘You know, back in the ’60s that wasn’t considered racist’ 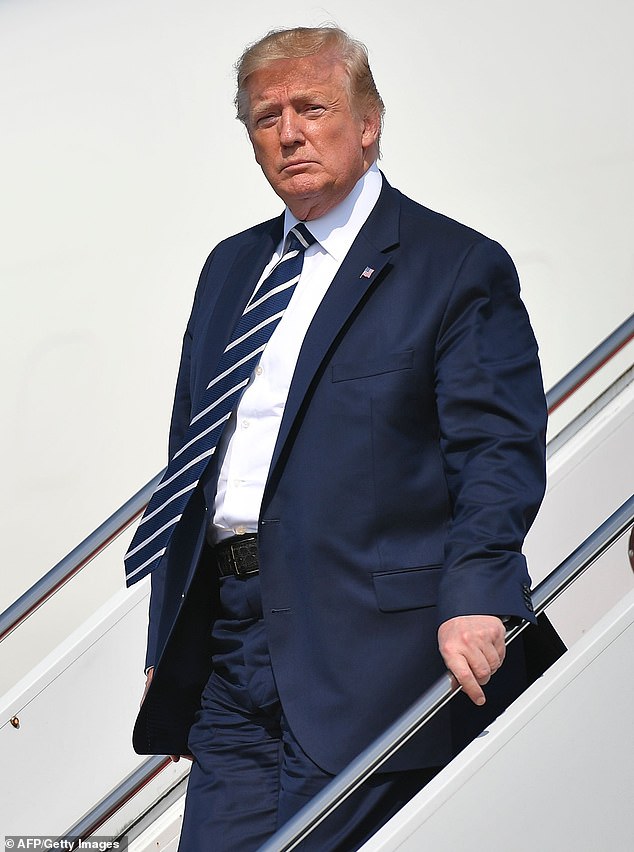 This week, Trump said in reference to four minority freshmen congresswomen that if they don’t like American they can leave

The comment was largely condemned and viewed as another variation of the racially charged sentiment of telling immigrants and minorities in the U.S. to ‘go back to where they came from.’

As the four congresswomen held a press conference Monday to address the attacks, Trump tweeted ‘you can leave,’ to people that don’t like American how it is.

Johnson chalked the comments up to the president’s love of the U.S., and issued criticism to Democrats and the media for making the issue about race.

‘I just find it very unfortunate that so many parts of our public debate right now are getting immediately stuck inside a racial framework, when what I would like to see is us moving toward that colorblind society,’ he said.

He did, however, say he did not agree with Trump’s tweet Sunday morning that said the congresswomen, Alexandria Ocasio-Cortez, Ilhan Omar, Rashida Tlaib and Ayanna Pressley, are incapable of loving the U.S.

‘I don’t believe the four Congresswomen are capable of loving our Country,’ Trump tweeted Sunday morning. ‘They should apologize to America (and Israel) for the horrible (hateful) things they have said. They are destroying the Democrat Party, but are weak & insecure people who can never destroy our great Nation!’ 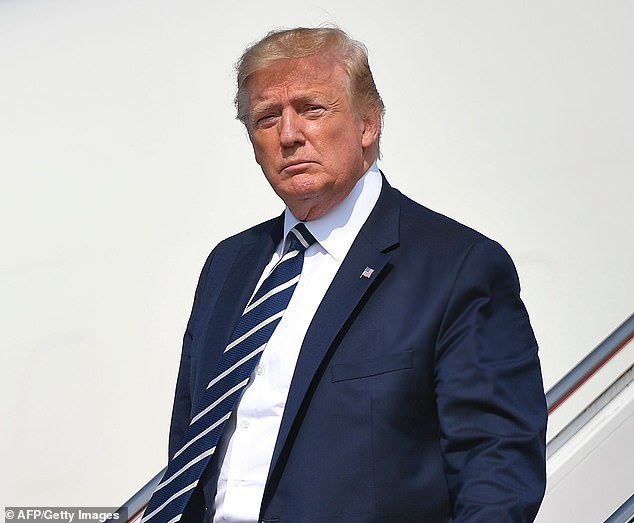 The president’s comments come after he issued attacks on the congresswomen last weekend, telling them to ‘go back’ and fix their countries of origin 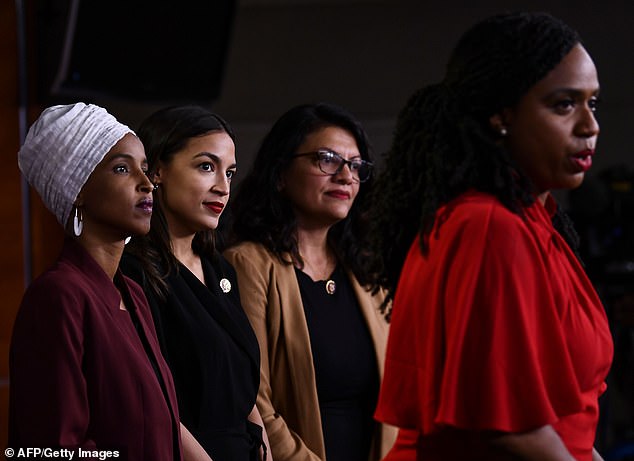 Ilhan Omar, Alexandria Ocasio-Cortez, Rashida Tlaib and Ayanna Pressley (left to right) are all minority women elected to the House in the 2018 midterms. They are progressives that call themselves ‘the squad’ 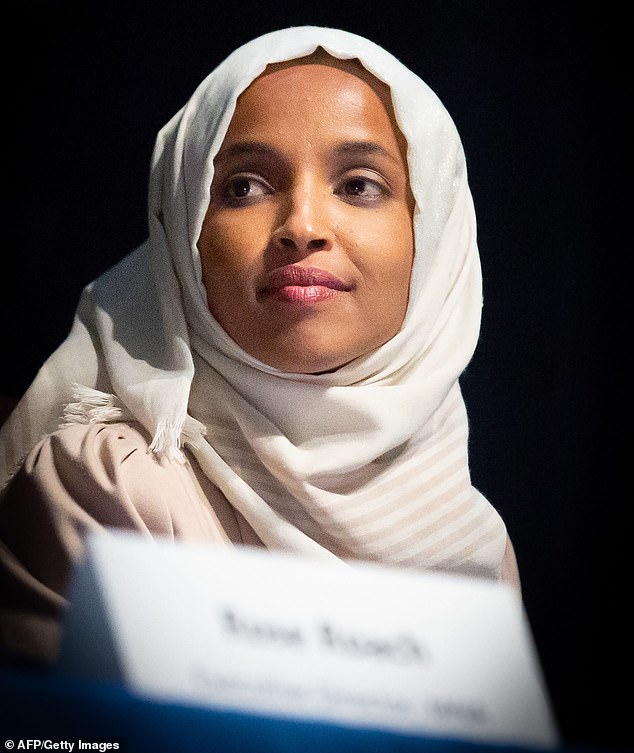 Of the four, only Omar was born in a country other than the U.S. 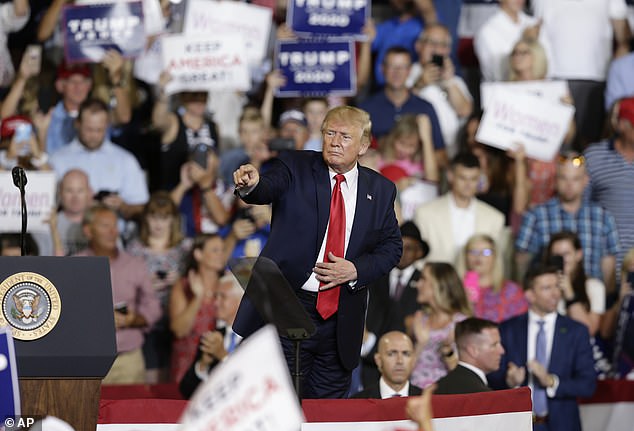 During a rally Wednesday night, the crowd chanted, ‘Send her back!’ in reference to Omar – which Trump let go on for about 13 seconds. He later defended the rally-goers as ‘patriots’ 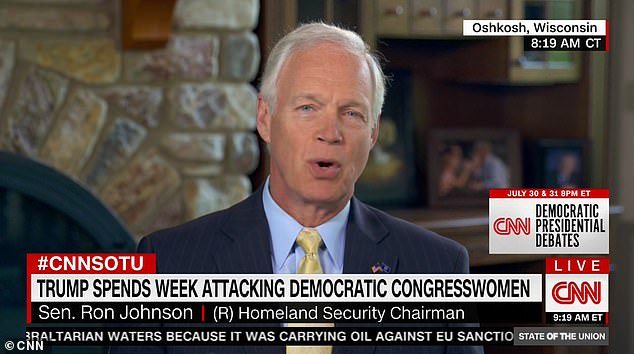 Johnson said he did not agree with the chanting. ‘The president did not like the chant. I didn’t like the chant… And so, hopefully, there won’t be another crowd in one of those rallies that do that,’ he said

When asked about the tweet Johnson said, ‘I mean, that’s his opinion. I don’t agree with it.’

He also criticized the crowd at Trump’s rally in Greenville, North Carolina on Wednesday.

The crowd chanted, ‘Send her back!’ if reference to Omar after Trump spent several minutes on the topic of the quartet of congresswomen.

At the rally, Trump said Omar is un-American and claiming she ‘minimized the September 11 attacks on our homeland.’ Trump is referencing her previous comments where the said ‘some people did something’ when talking about the members of al-Qaeda that carried out the terrorist attacks.

‘She looks down with contempt on hard-working Americans, saying that ‘ignorance is pervasive in many parts of this country,” Trump said just before the chant broke out.

‘The president did not like the chant. I didn’t like the chant,’ Johnson said. ‘And so, hopefully, there won’t be another crowd in one of those rallies that do that.’

The president, however, issued conflicting statements on the chant. At first condemning them, and later calling those chanting ‘patriots.’

The comments below have been moderated in advance.