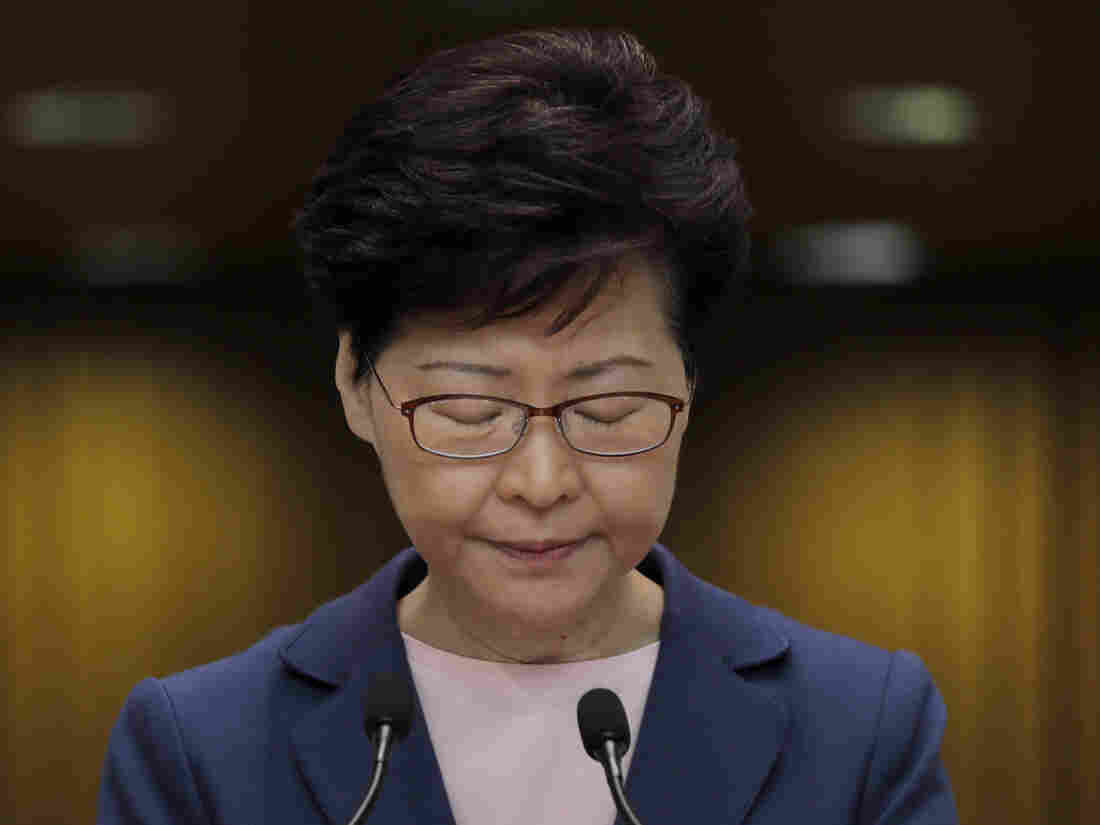 Hong Kong Chief Executive Carrie Lam said Tuesday the effort to amend an extradition bill was dead, but it wasn’t clear if the legislation was being withdrawn as protesters have demanded.

Hong Kong Chief Executive Carrie Lam said Tuesday the effort to amend an extradition bill was dead, but it wasn’t clear if the legislation was being withdrawn as protesters have demanded.

Hong Kong leader Carrie Lam said on Tuesday the extradition bill that prompted weeks of street demonstrations is “dead,” admitting that the government’s handling of it was a “total failure.”

The measure would have allowed people in Hong Kong to be sent to mainland China to face trials in courts controlled by the Communist Party, sparking fears of politically-motivated prosecutions targeting outspoken critics of China.

The backlash to the bill has prompted the most serious challenge to the Beijing-controlled government of Hong Kong since the former British colony was returned to China in 1997.

In mid-June Lam responded to huge protests by suspending the bill, but that move failed to mollify critics, who continued to demonstrate against the bill and call for Lam’s resignation.

And in the face of Lam’s declaration, Hong Kong protesters leaders are not satisfied, saying the bill should be formally withdrawn.

Pro-democracy activist Joshua Wong wrote on Twitter that Lam telling the country the bill is dead is a “ridiculous lie,” since she did not invoke federal powers necessarily to really kill the bill. Plus, Wong said the Hong Kong leader has not committed to not re-introducing the bill at a later date, which protesters are demanding.

Activists like Wong are also urging Lam for an independent investigation into some of the forceful tactics Hong Kong police used against demonstrators, which by some estimates reached around 2 million people at the height of the protests. Riot police used tear gas, rubber bullets and water cannons to disperse crowds blocking roads.

Angry demonstrators hurled bricks and bottles in the clashes with police that Lam at one point called “organized riots.”

But on Tuesday, Lam said those who object to the extradition bill have nothing to fear.

She said she realizes there are “lingering doubts about the government’s sincerity or worries about whether it would re-start the process in the legislative council,” yet, she emphasized: “There is no such plan. The bill is dead.”

Under Hong Kong’s “one country, two systems” formula of government, the territory retains freedoms not enjoyed in mainland China. Demonstrators fearing an erosion of those freedoms and are talking of extending their protests.

Police are still searching for suspects who disrupted the 22nd anniversary of the city’s handover from Britain to China, storming he Legislative Council and vandalizing the property.

Hong Kong demonstrator Katherine, 26, who only agreed to talk if her last name was not revealed, told NPR’s Julie McCarthy, that the destruction of the property paled in comparison to what she claims the government is trying to destroy: the rights of Hong Kong people.

China, she said, is not the enemy.